October is Filipino American History Month!
We're celebrating with big laughs. Join us for a virtual comedy show. Get your pancit and bibingka ready, or halo halo if you wanna get a little crazy....... 😉 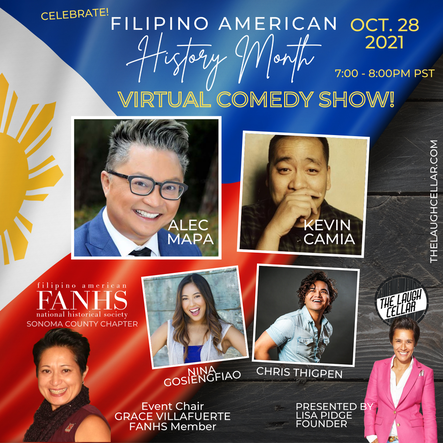 The virtual comedy show extravaganza event will benefit FANHS Sonoma County Chapter’s Katherine Baguio Scholarship Program. The program was created to promote and support continuing education among local youth, while honoring the memory of the late "Manang Kay" and her many contribution to the community.  Each year FANHS Sonoma awards a scholarship to a qualified college-bound student.  2021 marks the 11th anniversary of the scholarship program.  Learn more: http://www.fanhssonoma.org/

Before the laughs launch!
Event Chair Grace Villafuerte active member of FANHS Sonoma County will speak about the wonderful history of the non-profit organization. 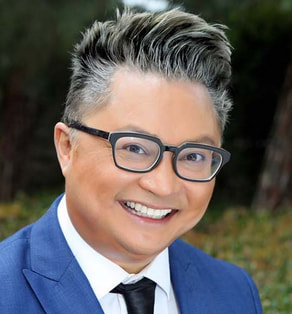 ALEC MAPA
Alec was awarded the prestigious Davidson Valentini GLAAD Award for promoting equal rights for the LGBTQ+ community. A tireless fundraiser, Alec has toured the country on behalf of The Human Rights Campaign and The Matthew Shepard Foundation. With uproarious live performances and groundbreaking television roles, actor and comedian Alec Mapa has entertained audiences worldwide in every imaginable medium. He got his first professional break when he was cast to replace B.D. Wong for the role of Song Liling in the Broadway production of M. Butterfly.  He gained recognition for roles such as Adam Benet on Half & Half, Suzuki St. Pierre on Ugly Betty and Vern on Desperate Housewives. He recurred as Renzo on Switched at Birth.  In 2013, he debuted in his one-man show, Alec Mapa: Baby Daddy, which was made into a concert film and premiered on Showtime.  You may have seen Alec in his recurring role as Animal Vegetable Mineral Man on the hit series Doom Patrol now streaming on DC Universe.  Mapa lends his support to various projects supporting the gay, lesbian and Asian American communities. ​
​ 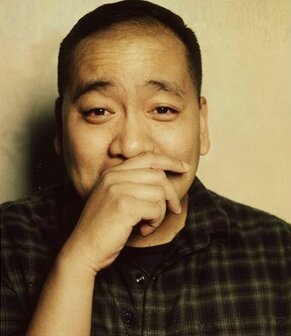 KEVIN CAMIA
Kevin Camia is a Los Angeles based stand-up comedian.  He is a member of The Dress Up Gang, the show was selected for the 2019 Sundance Film Festival as part of the indie episodic series.  Kevin toured the country opening for Ali Wong.  He's been on Comedy Central's Live at Gotham and The Late Show with Stephen Colbert.  He was selected as a Comic's Comic on Esquire.com. His first CD Kindness was voted Top 10 Comedy Albums of 2010 on iTunes.  His most recent credit is Lumpia with a Vengeance, an action comedy (2020).  Kevin has headlined at Just For Laughs Toronto, and The Cat Laughs Comedy Festival in Kilkenny, Ireland to name a couple.  He has written for MTV's Ridiculousness, and the The Funny Drop with Frankie Quinones, a web-based channel Mas Major produced by Broadway Video and NBC Universal.  Kevin grew up in Sonoma County! 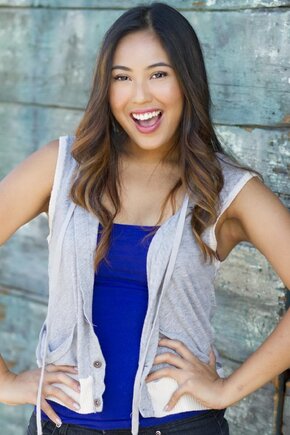 NINA GOSIENGFIAO
Nina Gosiengfiao is a Los Angeles based stand-up comedian, actress and singer.  She has appeared on NBC’s This Is Us, HBO’s Silicon Valley, Showtimes’s L-Word: Generation Q and ABC’s Grey’s Anatomy.  She also created a topical sketch comedy series called Pinoy News Update that features news surrounding the Filipino-American experience in the style of SNL’s Weekend Update. Nina is a SAG-AFTRA Actress. 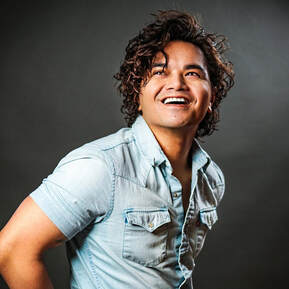 CHRIS THIGPEN
Chris Thigpen is an actor, filmmaker, writer & comedian. He has worked with Reno Improv. Chris has also worked on several short film projects with the Reno Film Collective. He performs stand-up comedy across Nevada and the San Francisco Bay Area. He was born in Olongopo, Philippines and moved to the United States when he was four years old. He was later nationalized as a United States citizen with the help of his military father. He later joined the Navy to serve his country and is a US Navy Veteran. With his partner Kirt, Chris is co-founder and owner of Ace Studios. The company is a multi-media marketing and design agency based in Reno, Nevada.
Virtual admission : : $28 per household
Invite friends for a Watch Party!  Post your watch party selfies via Facebook : :   @thelaughcellar : :
#fahmcomedyevent  #thelaughcellar

NOTE:  Gift certificates, Punch Down Pack, 'eight is great' packs or any other ticket vouchers not valid for this fundraiser event.
BUY YOUR VIRTUAL PASS
Dear Ticket Holders : Link to access the show will be emailed to you on the day of the event; so check your inbox just before the show on October 28.

​BUILDING COMMUNITY
We want to make sure that everyone who would like to attend is able to.  If you're not able to join us, or while you're purchasing your virtual pass, think about buying a donation ticket virtual pass as well. We'll make sure someone who does not have the funds can join us for a night of laughs! ​
​The Laugh Cellar is a Filipino American owned business!